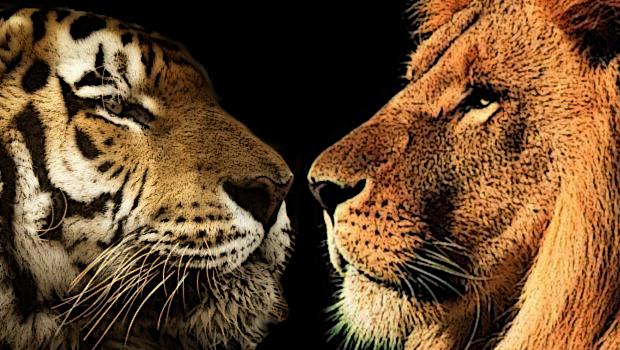 Let’s finally answer this question which inhabits the human brain since the dawn of time:

WHO IS STRONGER, THE LION OR THE TIGER?

The two individuals who will meet on the ring today are two champions, the most hefty of their species:

THE KING OF THE JUNGLE

What strikes the eye, from that overview on their characteristics, is that the lion has the advantage of height in addition to carrying a natural armor around his neck, while the tiger has just a ridiculous little collar.

Moreover, thanks to its speed that far surpasses the one of the tiger, the lion may retreat at any time during battle, to develop a new strategy.

Despite these flawless arguments, a bunch of idiots persist in spreading the preposterous idea that the tiger would have the advantage over the king of beasts. These outcasts publish videos on the internet that picture dwarf-asian-lions getting their ass kicked by Siberian tigers and of course, as always ladies and gentlemen; the brainwashing propaganda finds its audience. So enough talking, and let’s watch the duel, for real!

The gong bells and the duel begins.

The tiger is camouflaged. Enjoying the advantage of his stripes, he hides behind a row of parallel bamboos facing the sun … pretty unlikely to happen but ok, let’s admit the lion has not seen him.

The tiger is a predator, a hunter, an athlete, a killer. His method is simple and proven: he catches his prey, jumps on it and breaks its neck (if the prey is small) or bites it to the throat (if the prey is larger) in order to choke it.

The lion passes near the row of parallel bamboos facing the sun… He whistles, he does not suspect anything … Suddenly the tiger jumps on him, seizes him by the neck and… Surprise! The lion has a mane!

Indeed, because I forgot to mention that the tiger is not exactly a top intellectual. Its psychology is simple, he does what he is used to do, which he theorizes as follows:

But this time, the expected result doesn’t show up, so what to do? The tiger wonders.

Meanwhile, the lion (who’s got a tiger hanging at his mane, remember?) understands that he has been mistaken with a young wandering little gazelle, that he has been attacked! He finds the situation pretty humiliating and, being accustomed to fighting, he also understands what the situation implements, for the lion, since its entry into adulthood, has been in constant struggle with other lions, leaving a good among of broken noses on his way, without which he would not have lasted much as a lion. The tiger is a hunter: he jumps on something that moves, kills it, eats it. If the something doesn’t agree to die, the tiger gets all confused, while the lion, which is more a warrior than a hunter, has got his share of fights before imposing himself as a leader and banging all the lionesses.

Usain is an impressive athlete. Smiling, happy after each new success, he has no idea of the toughness of the world in which evolves Bobby, his opponent.

A fight between a tiger and a lion, in short, is a bit like a boxing game between Usain Bolt, record man of the 100 meters race since the Olympic games of Beijing in 2009, and Bob-the-barfly, drunkard of his neighborhood, champion of the Shamrock pub darts competition in 1999. Of course, Usain seems better built and one might tempted to bet on him, but Bob could write books about kicks in the ass (if he knew how to write), it’s not something that bothers him.

So the tiger clings to the lion’s mane. Perhaps that, taking advantage of the momentum, he manages to take the lion down… And then what? What does he do after, the tiger?? He has no idea!

Obviously, after a while, the lion frees himself. He uses his tremendous speed advantage (10km/h!!!) to distance the tiger so that he can peacefully give a thought to what the fuck is going on.

Bob-the-barfly is used to punch and get punched when a glass gets broken at the bar. He might not run straight but he won’t get frightened by a hit in the face: that’s his daily fate. Therefore, Bobby feels confident, look at his right hand: he is already doing the victory sign! (he would do the same with the other hand if his state would allow it)

The tiger thinks as well, wondering how it is possible that his victim gets up and runs faster than him. That the very instant when the the lion roars. Yes, the lion had time enough to think and he has thought that it is a good moment to roar, to remind the tiger that he is not an innocent gazelle, but the king of beasts, fucking hell!

Thus the tiger understands its mistake (finally!): even he, is aware that gazelles do not roar.

At this point of the story, the tiger has only two solutions, either he faces a raging lion equipped with a canine-proof mane who wants him dead, or he runs away, tail between his legs, like a young kitten who woke up a mastiff …

And guess what? Tiger systematically opts for the latter. SYSTEMATICALLY! The only one exception to this rule is when the tiger is actually a polar bear (800 kg; 300 cm long; 40km / h top speed), in such case he gives a slap to the lion and the job is done.

In short: of the tiger and the lion, the strongest is the polar bear.

Look at this monster!!! The polar bear would be the real king of beasts if he was not wasting his time by drinking cola on the ice floe…

You also wonder who is stronger between Wolverine and Spiderman? Get a translation here!