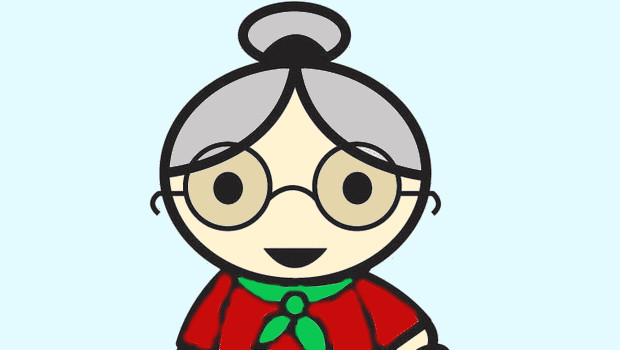 It was one of those peaceful autumnal afternoon, when nature undresses leaf by leaf, and brown cheeky animals, having fully enjoyed their last days of summer, are somehow ready for the pale season of silent : they await the first iced flakes, white, blue, pales, etc. but we don’t really give a shit about that.

I was visiting « Mamie » : my grand-mother, in the suburbs of Arles, in the south-east of France. She had stayed there by the fig tree of my childhood, long after my grand-dad was gone, and in spite of our invitations to move out somewhere else, because she had « far too much to do here » such as « cleaning the house » that she was now dirtying alone.

Each time I come to visit her, memories of my childhood flash into my brain, which is kind of handy (I mean : better than if they would flash anywhere else). For example : the front door reminds me of how we used to ring the bell on arrival and hide behind the neighbour’s porch, my sister and I, awaiting for Mamie to open the door and ask in despair to our parents if the children hadn’t come ? Before running out to her !

…Or my dad’s childhood blue room with that blue bed we still share once a year on Chrismas eve, covered in a dark blue fluffy quilt that, most probably, had directly been cut out from the fur of a wild, giant, teddy bear ! By the bed there is a mini chest of drawers filled up with children books which recall the way Mamie used to read us the stories we had begged for : « The adventures of Mousinette », « Spot goes to school » and « Mr Seguin’s goat » from « The letters of my windmil », the said « windmil » being located not far from her house. She would read out those stories with her fruity southern accent, puting syllabs to sing, dance, like if they were patiently trampling herbes de Provence somewhere in the nearby hills to end up prevailing on words and turning phrases into some apetising confit cherry cake we could only ask for more… a bad strategy !

Oh and there’s the fig tree of course, that would provide us with the best delights of our early years : when sweets used to grow on trees. We would collect the figs (or let’s better say that, for practical « lenght » reason, we would support my grand-dad doing so) before conveying our loot to Mamie who would open each fig under our eyes to check if there were no ants hidden inside and, after cautious examination, valid or invalid each piece of our plunder.

That autumnal afternoon, I was paying Mamie a visit between two trips that would take me to the far ends of the World : if I recall correctly I was back from Sri Lanka and soon to fly to Las Vegas, starting point of an american road trip in the american national parks and indian native american reservations. She had no idea really : probably she could picture those places as I did myself before going, basing her imagination on stereotypes, but it is also possible that her sterotyped world terminated in the surroundings of Provence as the rest was just « too far away » to imagine.

It didn’t really matter. My visit would always follow the same routine : I would ring the bell and, through the door, hear the stamp of her feet going down not-slowly-enough her stiff and dangerous staircase. She would open the door ; laugh ; tell me I’m « pretty » ; that I’ve grown taller (while she was most certainly growing smaller) ; apologise that the food she had got such a hard time to cook for me with her trembling hands won’t be good enough ; listen to the updates on my life while insisting I eat more of everything and despite every effort I could make on that matter she would undoubtly conclude that I don’t eat anything and insist that I take at least a bit of my favourite cheese or dessert that she had bought for that special purpose. Then she would worry I might be late somewhere else and drive me to the car while putting a bill of variable amount in my hand, of which she never seemed to look really aware of, ranging from a waiter’s tip to the largest numbers.

Al-ways the same routine !
But that very day, something very unusual occured.

As I was trying to please Mamie by storing some more cheese at the bottom of my mouth, given that cheese had been my favourite one from 4 to 14 years old and that no change of taste has even been suspected since, Mamie disappeared in the living room to come back soon after with a full hands of black and white pictures. They all happened to be a bit meaningless to me, picturing people I didn’t know and that I merely had heard of. Mamie would review them with me and teach me the name of each character… nothing so special yet, until she pointed at a small boy, dressed up as a girl, with blondish hair flowing out of a navy hat.

– And this one ! Will you tell me you don’t recognise him ? She asked, with a cheeky look
– Well, no… I answered flatly, but I guess that it’s probably Papa (daddy), since you ask !
She burst in a laugh.
– No ! Not daddy ! It’s you here, on the picture !

She looked somehow very excited by now, amazed and amused that I couldn’t recognise myself on a picture that would be at least 30 years old. I would smile as well, happy my mistake could give her so much joy… but really, taking a double look at the picture, I couldn’t recognise myself. The picture looked really old and the clothes of that baby particularly unfitting, although baby clothes are rarely fancy I doubt people (and in that particular case my parents) could have dressed up their son that way in the 80s.

– Are you sure ? I asked.
– Of course I am, she answered, without even giving the picture a second look but staring at me with her persistant expression of amusement.

I scruted the picture, trying to spot a clue that would support her truth. Thus, I recognised the young, well charpented rondlet guy sitting next to the baby: it was my grand father. There was no way I could have met my grandfather that young.

– It’s not me Mamie, it’s Papa, look : Papi (grand dad) is on the picture as well.
This time, Mamie took a second look. But it would only confort her :
– Yes it’s Papa, she said pointing at Papi, but then you are here, she added.

I just got struck by a freezing lighting that would keep sparkling up and down my chin in a very alarming move. I decided to double check what I just feared to understand :

She stopped nodding at once. Now she wasn’t amused anymore and the energy waves we were exchanging in that moment tended to prefigure a very dramatic scene.

She seemed doubtful, equally angry and afraid, like if she didn’t know for sure what mood she should go for.

That was embarrassing… Should I let her believe so ? Instinctiveley I wouldn’t, and thinking about it neither : I had to bring her back to reality.

– No Mamie : I am not your son, I am your grand-son, Nabolo, the son of Alain, who is the baby on the picture, with Louis, your husband…

I was trying to be sweet but firm… as much as the two combine. Mamie started looking very puzzled now. She was turning… what… ? Was the word crazy… ? Whatever : we both had just witnessed it. Waves of sadness were radiating from her body everywhere around, in the room and through my own self. I could feel her Ki getting lower and lower… falling down and downer… something was on the edge to crash.

When I went to study Kung-fu in China, my Kung-fu master didn’t teach me much regarding fighting skills, and I would undoubtly die of an early death if I was trying to fight using the no-technics I got from him. Though, he taught me the secret kung-fu art of fighting moods by moods : « Chase fire with water, he said, flush away the anger with the tears of sadness, but break worry and fear in the flames of joy… »
Well, I’m not EXACTLY sure he ever really said that : everything he taught me was so dense that I merely remember some key concepts but his image was saying it to me right now, in my imagination.

I burst into laugh, pressing Mamie in my arms to avoid her feeling embarrassment… At the same time I made clear I wasn’t laughing at her mistake, no : I was being enthusiastic at the adventure we were confronted to : the adventure of determining the identity of that baby in the picture. Mamie started laughing as well and we would start a merry inquiry on who’s who.

I listened to her point of view with attention, making her feel like I indeed believed there was a chance for her theory to be true although I still had my own contradictory version. After she was done quoting all the evidences establishing I was her son Alain, I confrontated her with a picture of me she had pined on the cupboard of the living-room.

– Ok, so ! At least we both agree it’s Alain on your black and white picture…
– Yes ! She answered with enthusiam, as we were both having a lot of fun now.
– So who is this, then ? And I produced my own portrait.

She kept chuckling while answering :

Yes ! Excellent ! Everything was going smooth so far. I was just one step from bringing her back. I put the portrait right next to my face and asked :

She scrutinised me for a couple of seconds.

Erf ! I laughed. It was fun. She laughed from seeing me happy. We both laughed even more, for a long while, and it’s actually one of the happiest and longest laughter we have shared together since the time she was bouncing me on her knees.

I looked at my portrait again. It was that ridiculous picture from my « Bollywood portfolio », the one where I carry a tyer on my shoulder, half naked, in the desert, with camels passing by in the background while adressing a « confident viril » look (as suggested by the photograph) to the camera. This picture was supposed to make me a star in India. I can’t believe this actually worked (at least beyond my expectations), but my grandmother obviously saw no connexion with the present me. Not a bad thing in itself though.
Mamie started pulling my arm :

– I’m not kidding, she insisted, still smiling though, your name is Alain, Guy, Marie and you are born on the 28th of august 1946. Wait, I’ll show you.

I followed Mamie downstair and watched her as she was diving into her wardrobe, mining mountains of papers that must have remain untouched for decades. I was wondering how would the story end. Mamie seemed to believe in the power of official administrative papers and it would have been handy to produce my passport but I didn’t hav… Oh wait ! I had my driving licence !

– Look Mamie, I interrupted, I have my driving licence here !

She stared at it for a while.

We laughed. She wasn’t sad anymore. She looked like a naughty little girl who had just made a silly mistake her parents would be happy to forgive her for. We hugged eternally. She might not know for sure who I was really at that very moment but she loved me and I loved her.