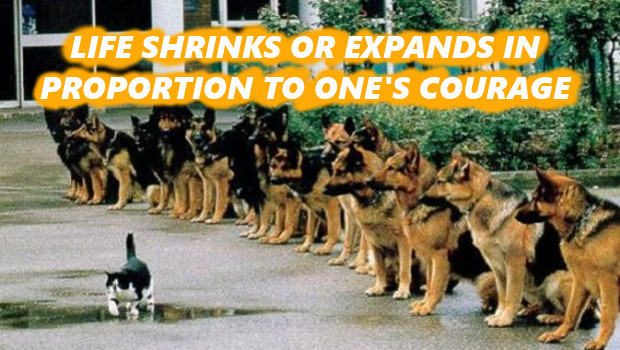 Did you ever witness such phenomenon ? I did, again, this morning, during my singing class… and I thank Plop it causes me wonder…

Plop is a non-too-serious god of mine : to say the truth I’d rather tank parents and education… what for ? I am self-confident. Not always as much as needed when it regards my biggest ambitions, but enough to understand so and work on it.

Self-confidence IS freedom. The two concepts are intensely interlocked.

Self-confidence allows me to think differently than everybody around, to speak out loud, to dare.

Whether it regards your love-life, your professional-life or your social life it’s the best skill you can dream off…

I would never have dared to travel without it, and even less : to write to you on that blog.

Self-confidence is about allowing yourself to think you maybe right, or that you might do just as good (if not better) than the others.

It’s about loving yourself enough to believe that you can bring something to the World !

Yes, an excess of self-love will easily turn you into a deaf-blind (though talkative) asshole BUT it wouldn’t make you sad. You’d be blind but happy.

How sad is, on the other hand, the skilled being who undervalues himself permanently.

Today, in my singing class (was I saying), one of my comrad had to perform on stage. She did fairly well the first time, and even better the second time. She has a very nice voice to listen to, well shaped, with caracter. A voice that sounds like it has a story, whatever it talks about.

As a singer, she is just a beginner but she was singing fine. Listening to her is just pleasing, as pleasing is the smell of a rose on a late night walk by the lake of the mount… MUSES !! But… ?! MUUUUUUSES !!! Won’t you ever leave in peace for gods sake?!

Anyway : you got the idea.

Despite all this, my comrade looked very unpleased. The teacher asked her why ? She answered she hated singing, as she had a terrible voice.

I think everybody had the same thought at that same moment : « She is totally mistaking…! »

The teacher tried to get a bit deeper :

– But would you enjoy singing if you had a better voice ?

My comrade burst into tears.

It was a very touching moment and hours later I still wonder. What happened in her mind and in her heart ? Why did she cry ? Did someone, as a child, once told her she didn’t know how to sing and did she, since then, carry that wound until this very day ?

I’ve witnessed such phenomenon pleeeeeenty of times. People breaking down because they believe they’ve reached their own limit. Because it’s printed in their mind : « this is something I cannot do ».

There is sooooo much each of us can do. But our beliefs are our own limits.

Please parents and friends, always support the one who’s trying. Trying is such a beautiful gesture. It’s a brave action and bravery a noble trait.

And you, the woundeds : hopefully there is someone nearby who can supply you with enough love to heal the wounds and overpass any obstacles…

Would there be none ? It is not important : do it yourself.