Allegories of Time: the rabbit and the crocodile 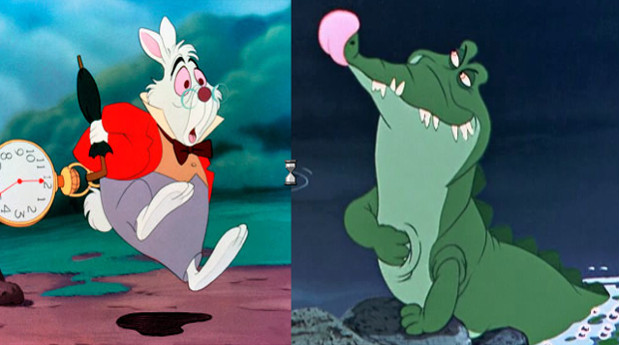 Here we are again, on a philosophical adventure to compare two famous characters who both stand as an allegory of Time: Alice’s white rabbit and Peter Pan’s crocodile.

Whether we are in Neverland or Wonderland, everything is symbol. What do those two characters really stand for ? What do they tell us about their worlds ?

I figured it all about the white rabbit this morning, as I was brushing my teeth: he is a middle class working man. A random little functionary, with nothing more to fill up his life than duty, his existence being ruled by it: he owes it to a greater power, Time, to which he is fully dedicated.
The White Rabbit isn’t very pleasant company, neither is he original: his only concern is to be on time.
He symbolizes all the beings that are slaves to Time: the working-class.
Upper-class characters, those with authority and power (such as the Queen); the mads or the artists don’t have such concerns, although they obey different rules.

From Alice point of view, the white rabbit concerns are all very intriguing. As a child, she is free from time pressure and she wonders: what can one be late for ? What does it mean to be late ? What’s the point ?
Alice is free from time pressure but, being curious, she wonders what it’s like to live under its dominance and why for. Thus: she follows the rabbit into the rabbit hole.

A “hole” is not a very positive concept or word, it’s an isolated place, cut from the rest of the world, darkened with ignorance: this is where the white rabbit lives.
In his dark hole he is “white”, as the good, the pure, innocent family man no one can address reproaches to.
It’s by entering the house of such an individual whom life is ruled by the tick of a clock that Alice enters Wonderland… or should I say “Adult-land”, a place that there is a lot to “wonder” about, as it is full of non-sense rules (such as obeying time and manners) and meaningless beings such as play cards (obeying-orders creatures)… Only one creature there seems to understand what it’s all about: a cat, which stands as a reflection of Alice childhood pet and companion she left behind: Dina.
But let’s not talk about the cat, there would be too much to say. Let’s talk about the clock’odile.

He is the very threat of time. The most powerful being of Neverland where the Pirates hunt the Lost Boys, the Lost Boys hunt the Beasts, the Beasts hunt the Redskins, the Redskins hunt the Pirates.
The crocodile stands as the slowest but most powerful beast of the “chasing circle”.
The Pirates, symbolizing the adults, are chasing the Lost Boys who represent the children and childhood. Trying to limit their freedom, or take them into piracy (or adulthood).
The Lost Boys, being the children, chase the Beasts who stand as general adult concepts, such as order, fear, ambition, violence or time.
The Beasts walk against the Redskins: Beasts are servants to the practical and rational world. They are the power of money, concrete, time, violence, etc. fighting against imagination, adventures, games and love the Redskins stand for.
The Redskins, as a non-occidental culture, are threatened by time and the violence which work in favor of the adults/occidentals (the pirates) that they are chasing on the other side… Basically, on the back of the mind of an adult (or literally: “on his back” when it comes to Neverland) the imagination and freedom to dream are being chased by duties and time concerns.

Interestingly, from the way that circle is described, the Crocodile comes in last. It looks like he is the one initiating the movement of all the others. All the other beasts and what they symbolize are in motion because of the motion of Time who threatens to swallow dreams and imagination, prior to adults and children… Children are the only ones to defy him.
But if the Crocodile is a threat to them all, he is mainly interested by the old Captain Hook, from whom he already got a bite (the bite of Time necessarily makes you older). Peter Pan is of no interest to the crocodile and if Hook is terrified by the Crocodile, Peter really isn’t.

Peter is the one messing up the hunting circle. Why ? As a child who doesn’t grow up, he is immunized against the fear of Time. He connects the children to imagination (Lost Boys ally to the Redskins) and turn the Beasts (the Crocodile) against the adults (Hook): they are being devoured by the very concepts ruling their meaningless lives and Hook last words, while being swallowed by the Clock Monster are “bad form”: to his last minute he holds on to the meaningless rules from his adult world. His death is a permanent, unintelligible mistake that should not be, according to him. He doesn’t accept it as it doesn’t fit “his” rules… while Peter’s death would be an “an awfully big adventure”. The adults try to rule their world, the children welcome it with enthusiasm.

In the end, the Lost Boys led by Peter take over the pirate boat which stand as the destructive adult world. Now the Pirates are gone, Lost Boys, Redskins and Beasts don’t actually have to fight anymore… and I stop here cause there would be so much more to say.

SO: the white rabbit is the time feared, the crocodile is the fearsome time. They both spring and swim around the adultworld and are intriguing creatures to the children heroes, while they convey fear and madness to their adult counterpart.
A powerful message from two very wise men, C.Lewis and J.M. Barrie: if you want to remain sane, phoque the clock.